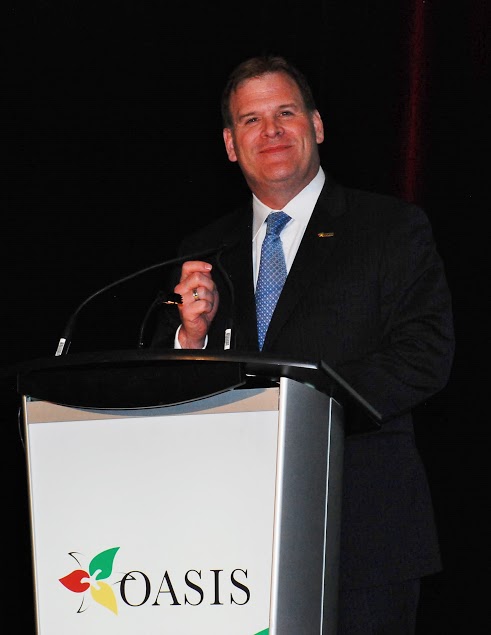 The Annie Oliver Award for Excellence, named after the founding President of OASIS, Annie Oliver, is awarded each year for outstanding contributions to the work of OASIS.

This year’s winner, the Honourable John Baird, is a native of Ottawa with two decades of experience in politics, this year’s recipient of the Annie Oliver award held a variety of government posts, including President of the Treasury Board, Minister of the Environment, Minister of Transport, Infrastructure and Communities, Leader of the Government in the House of Commons, and most recently Minister of Foreign Affairs from 2011 to 2015.

Prior to entering federal politics, he spent ten years in the Ontario Legislature, where he represented the constituency of Nepean – Carleton. From 1995 to 2005 he served as Minister of Community and Social Services, Minister of Energy and Government House Leader.

Currently, he serves as a Senior Business Advisor with Bennett Jones LLP, a premier Canadian law firm. In addition, he sits on the advisory board of Barrick Gold Corporation, the corporate boards of CP Rail, FWD Group and PineBridge Investments.  He is a Global Strategic Advisor to Hatch Limited, a Canadian global multidisciplinary management, engineering and development consultancy, and is a Senior Advisor at Eurasia Group, a global political risk consultancy.

This year’s Annie Oliver Award winner also volunteers his time with Community Living Ontario, the Prince’s Charities, the charitable office of His Royal Highness The Prince of Wales, and is a Board member of the Friends of Israel Initiative.  He holds an Honours Bachelor of Arts in Political Studies from Queen’s University at Kingston.